A 75-year-old female was admitted to hospital in March 2021 with a suspected acute heart failure decompensation. She had a dual chamber pacemaker in situ (ProponentTM, Boston Scientific) which was implanted in 2012, following periods of sinus arrest, following a redo typical atrial flutter ablation. In 2013, she had a surgical atrial septal defect (ASD) closure and bi-atrial dilation had been seen on echocardiography. A third ablation was performed in 2015 for symptomatic atrial tachycardia (AT). During this procedure, a focal AT was identified proximal to the position of the right atrial pacing lead and ablated. Since the ablation in 2015, the atrial threshold had been chronically elevated (2.8v@1 ms) with evidence of atrial latency (Figure 1). Otherwise, pacing checks had been normal with no further arrhythmic events. The device was programmed DDDR 60 BPM with 100% atrial pacing and approximately 90% ventricular pacing.

Clinically she had evidence of fluid overload and clinical heart failure with >10 kg recent weight gain. Despite a high dose IV with furosemide, weight loss plateaued prompting a device check. On interrogation, no arrhythmia episodes had been recorded and RV thresholds were normal. The atrial threshold test can be seen in Figure 2. 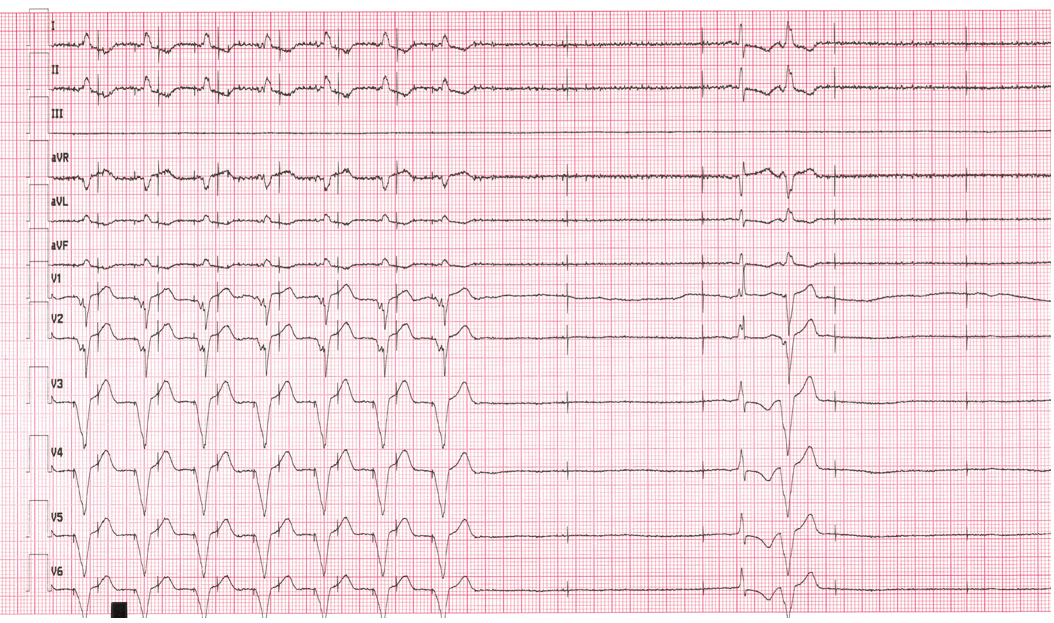 What is the most likely cause of the heart failure decompensation based upon this pacing follow-up?

The most likely cause of heart failure decompensation in this case is loss of AV synchrony. The atrial threshold test demonstrates loss of atrial capture. Following every atrial paced event, p waves are not apparent on the surface ECG which suggests loss of atrial capture and effectively rules out complete heart block and further atrial latency. The presence of an under sensed atrial arrhythmia with high grade AV block is possible, however her atrial tachycardias had previously demonstrated reasonable AV conduction so this was also unlikely (Figure 3).

Figure 3: AT with variable AV conduction

Atrial latency can be described as a delay between atrial pacing stimulation and surface ECG p waves. Typically, such delays occur due to significant scarring which slows conduction in the immediate vicinity of the pacing lead.1 It is important, particularly for patients with ventricular pacing indications, to consider atrial latency when programming the pacing mode and optimal AV delays.2 In this case study, ablation and subsequent fibrotic processes proximal to the lead tip are the probable causes of the conduction delay and eventual loss of capture.

The patient was scheduled for an atrial lead reposition to restore AV synchrony. During the procedure the right atrial appendage was the only viable location. Atrial latency was still present with a much-improved pacing threshold (0.75V@0.5 ms). The generator was also replaced during this procedure (AssurityTM, Abbott).

How should this patient’s device be programmed to avoid ventricular pacing?

Taking atrial latency into consideration when programming AV delays is imperative. One solution for atrial latency would be to programme dual-chamber antibradycardia pacing (DDD) with extended fixed AV delays. Helpfully, in patients with ventricular pacing indications, paced and sensed AV delays can be programmed differently which accommodates for differences between paced and sensed atrial timing. In this case however, the longest permitted AV delays were insufficient to allow for intrinsic conduction thus, fixed AV delays would not minimise ventricular pacing burden. AV hysteresis algorithms are a useful tool to extend the AV delays beyond the permitted fixed AV delays. However, should AV block develop, or the latency interval increase, AV delays will return to the fixed value and therefore ventricular pacing and AV dyssynchony may be reintroduced. That being said, in this case AV hysteresis algorithms is the only method which would accommodate such lengthy atrial latency. In regard to pacing mode, while atrial demand pacing (AAI) would prevent ventricular pacing, loss AV conduction or an increase in atrial threshold may result in ventricular standstill. To prevent this, some devices have the option to programme AAI-DDD modes. These pacing modes function in AAI during periods of intact AV conduction and mode switch to DDD when AV conduction is lost. This option was not available on the patient’s device. Ventricular demand (VVI) pacing or DDD with nominal AV delays are not appropriate since neither option would facilitate AV synchrony.

Following the atrial lead replacement, AV synchrony was restored, and the lower rate limit set to 70 BPM. Further fluid offloading was subsequently much easier on the wards over the following days. Unfortunately, a few days later (with normal device function), the patient developed spontaneous atrial fibrillation. This was initially successfully treated with amiodarone but after recurrence was treated with catheter ablation. Several complex atrial tachycardias were found and ablated (Figure 4). Extensive atrial fibrosis and atrial chamber dilation (RA 290 mls, LA 180 mls) was demonstrated as can be seen below (Figure 5). Given the extensive chamber dilation and scarring, further atrial arrhythmia was likely and AV node ablation alongside biventricular pacing was a proposed future option should this occur. 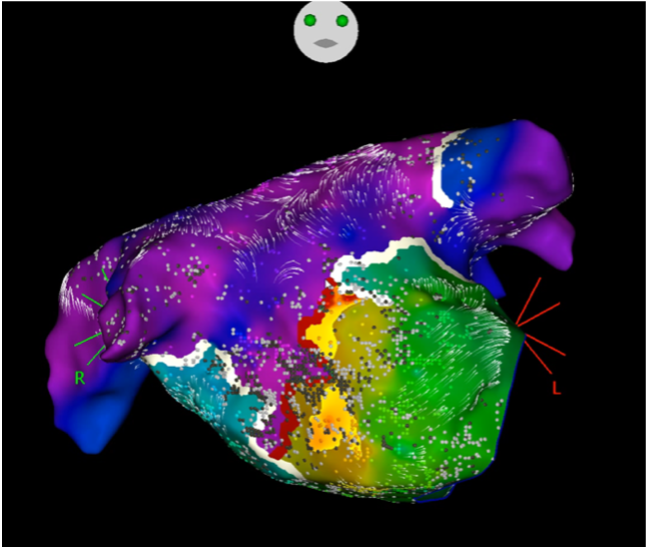 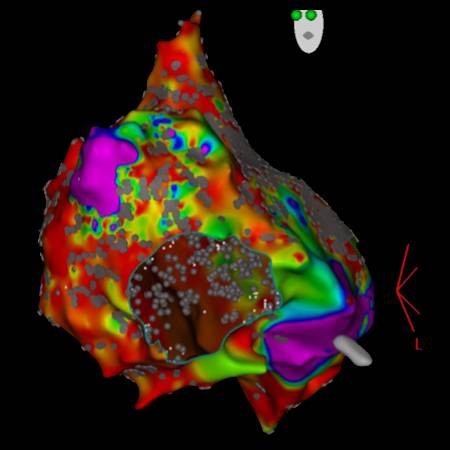 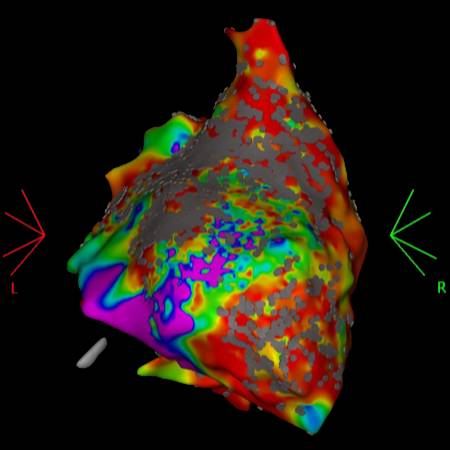 In summary, this case describes a patient with extensively scarred atria, arrhythmia and prior ablation which contributed to extreme atrial latency. Such patients can present several clinical challenges and as demonstrated here restoration of AV synchrony can help to facilitate diuresis. In addition, the residual atrial latency does present programming challenges and attempts should be made to optimise AV delays while avoiding ventricular pacing where possible.