A Common But Not So Common Flutter

A 69-year-old male with congenital heart disease was admitted to our institution with new onset palpitations. His past medical history was remarkable for an atrial septal defect (ostium primum) that needed surgical correction when he was 10 years old. He had been symptom-free since then and was now an active adult without any health complaints. He was known to be in sinus rhythm with a wide right bundle branch block (RBBB). On admission, the physical exam was remarkable for mild heart failure symptoms and his fast rhythmically arrhythmic heart rate. His baseline ECG at admission (Figure 1). 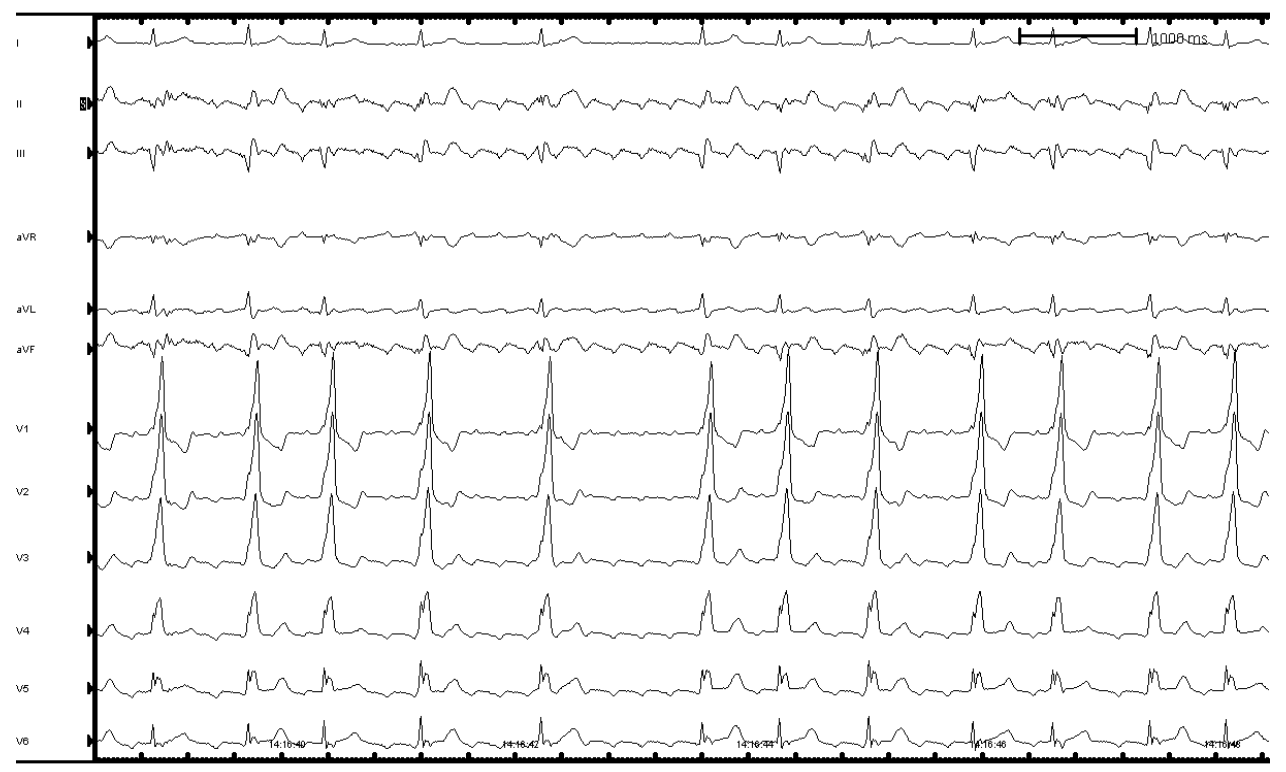 What would be the most likely circuit causing the arrhythmia of this patient and how would you approach it?

The ECG shows a sawtooth pattern at an atrial cycle length of 250 ms with a 2:3 AV conduction and a (known) broad right bundle branch block. This is compatible with a typical counterclockwise atrial flutter, with a circuit turning around the tricuspid ring.

Although a direct current external cardioversion could be a reasonable option, we elected to treat this patient with electrophysiological testing and ablation for a more definitive solution.

Would you use an electroanatomical mapping system in this arrhythmia? If so, why?

The ECG shows a sawtooth pattern at an atrial cycle length of 250 ms with a 2:3 AV conduction and a (known) broad right bundle branch block. This is compatible with a typical counterclockwise atrial flutter, with a circuit turning around the tricuspid ring.

The typical counterclockwise flutter image of the ECG indicates, with a very high likelihood, for Cavo-Tricuspid Isthmus (CTI) dependent flutter. We elected to perform the procedure as a simple intracardiac electrophysiology study (EPS) with two diagnostic catheters: Inquiry™ decapolar to the coronary sinus (CS) and Livewire™ duodecapolar into the tricuspid ring and an irrigated ablation catheter (FlexAbility™). We placed NavX™ patches in case the circuit was not CTI-dependent, and mapping was needed (Figure 2).

The tracings of activation an entrainment from the CTI are shown in Figure 3. 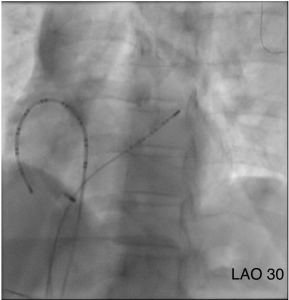 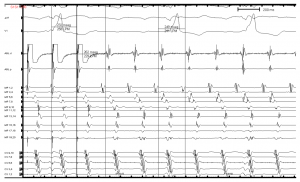 Is the diagnosis of CTI-dependent flutter confirmed? Would you perform additional mapping or just ablate in the CTI?

The findings of concealed entrainment and a post pacing interval tachycardia cycle length (PPI-TCL) of 30 ms during atrial overdrive pacing from the CTI, confirms that the CTI is involved in the circuit.

We decided not to do further mapping at this stage and to perform a CTI ablation line with 35W, 45 degrees and 45 second lesions.

During radiofrequency (RF) close to the inferior vena cava (IVC), the pattern of flutter activation changed to the one seen in the intracardiac recordings (Figure 4), without any motion of the diagnostic catheters. 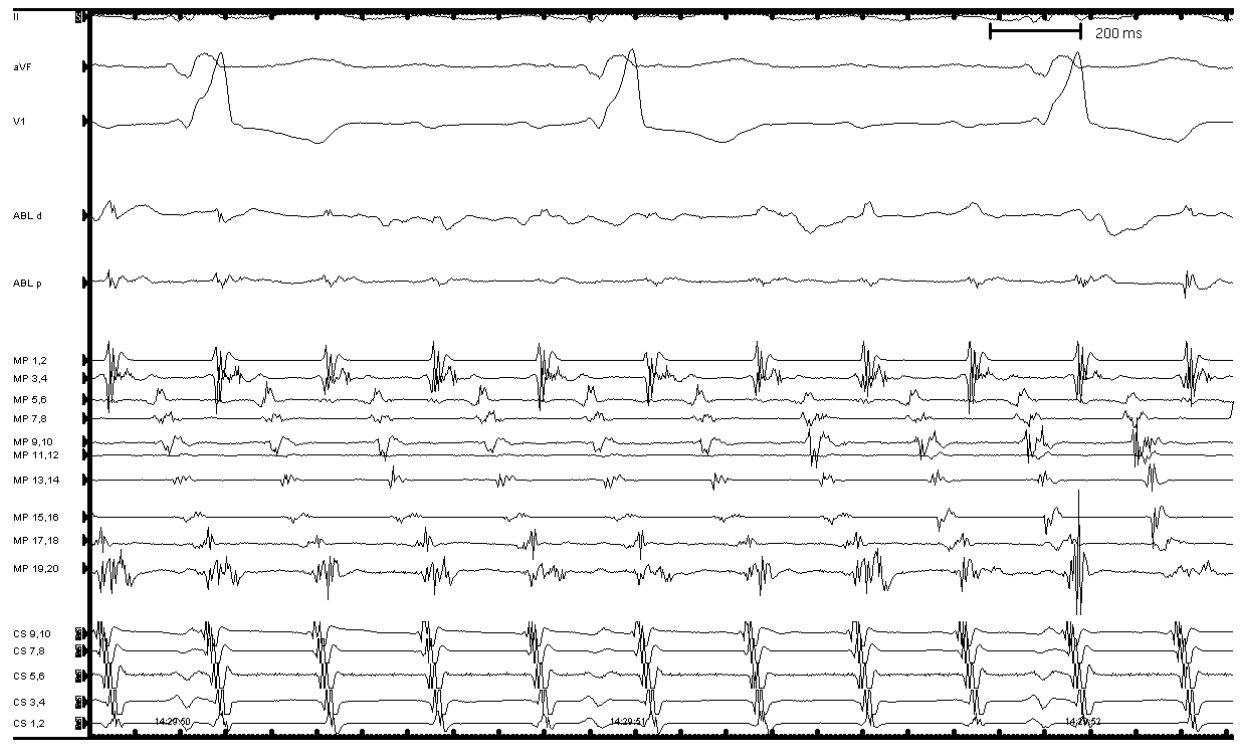 What does this change in the pattern of activation suggest?

We interpreted this change in activation pattern as evidence of another flutter that was coexisting with the initial one. In this second flutter, the cycle length (CL) is very similar to flutter 1 and although the pattern of activation suggests that a CTI flutter is present, entrainment from the CTI was not possible due to lack of capture in the area. We then performed entrainment from the CS ostium and had the response depicted in Figure 5 (PPI-TCL with manifest fusion). That response excluded quite certainly the presence of a CTI flutter and we elected to perform mapping of flutter 2. 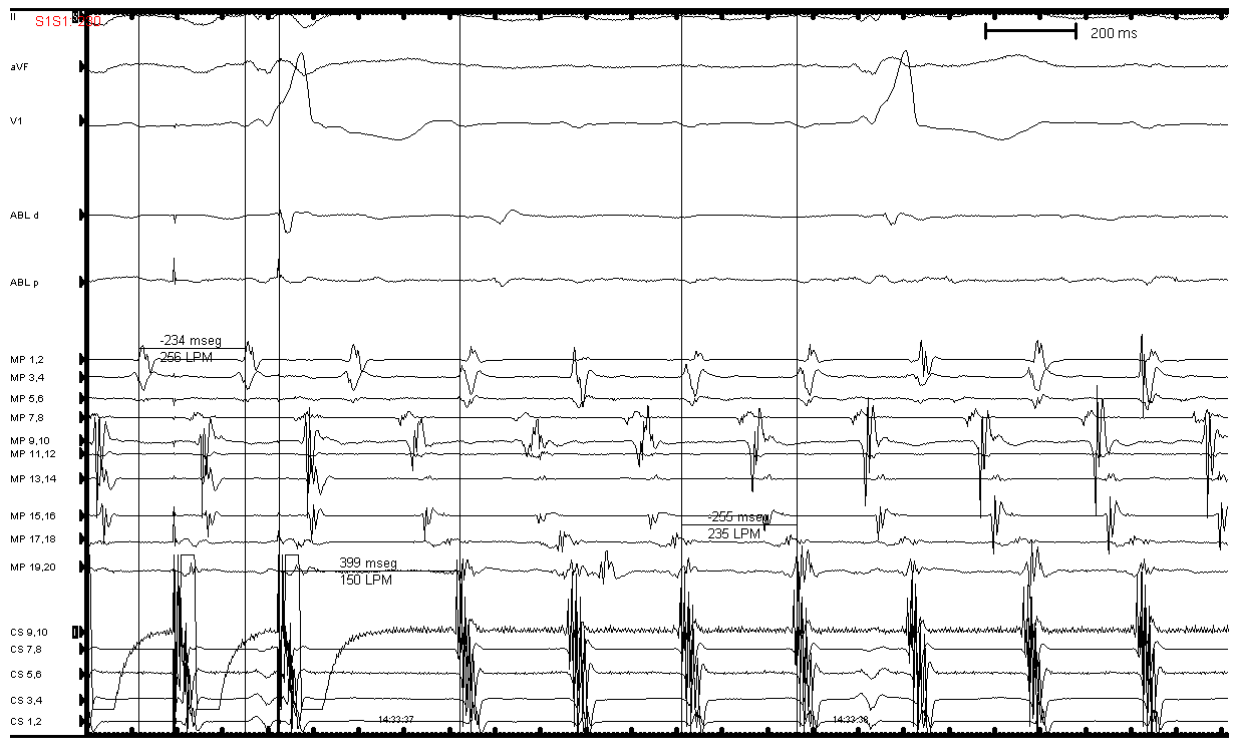 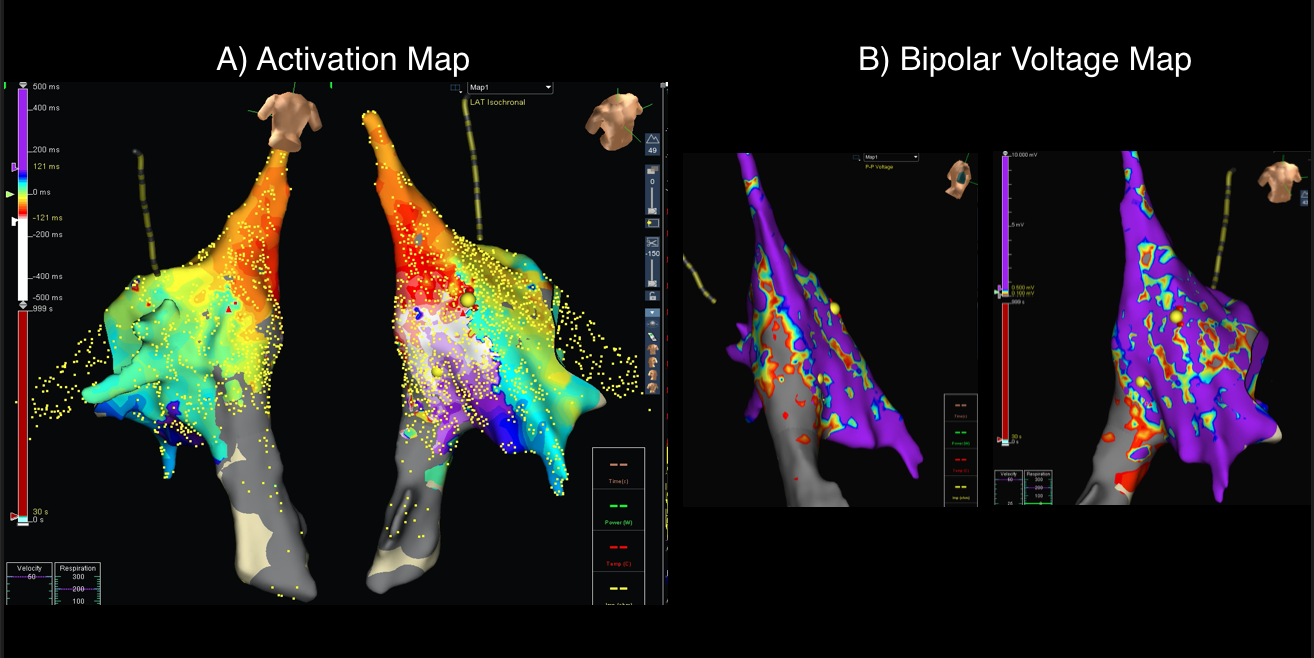 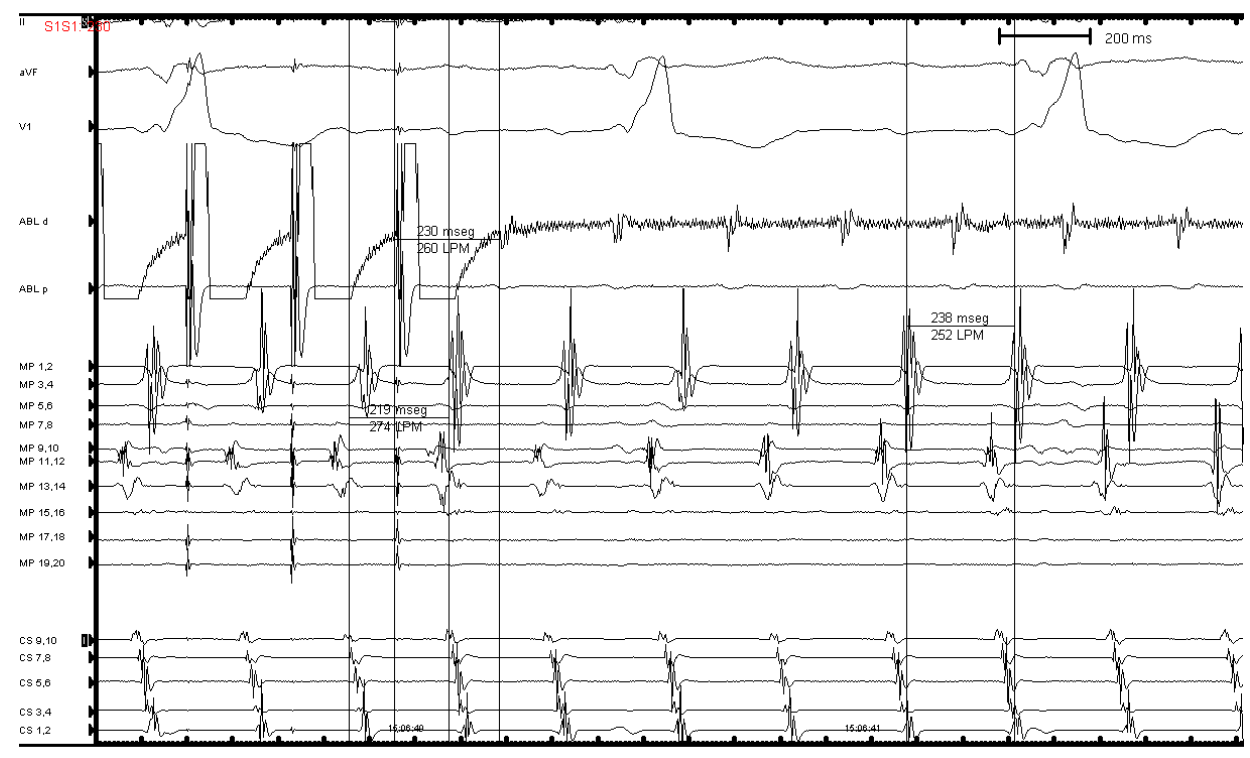 How would you treat this flutter? Would a focal RF terminate the episode? Are there any special safety concerns in this particular region before delivering RF?

We elected to perform a line of RF after carefully checking the absence of right phrenic nerve capture by pacing at high output in the region. The line joined the heterogeneous scar that acted as anchor point of the flutter with the dense scar of the previous atriotomy. RF at the entrainment spot did not terminate the flutter and it was only after completing the line that flutter 2 slowed and terminated during RF. (Figure 8).

The patient was not inducible for any other flutters and the CTI was still blocked so the procedure was terminated. 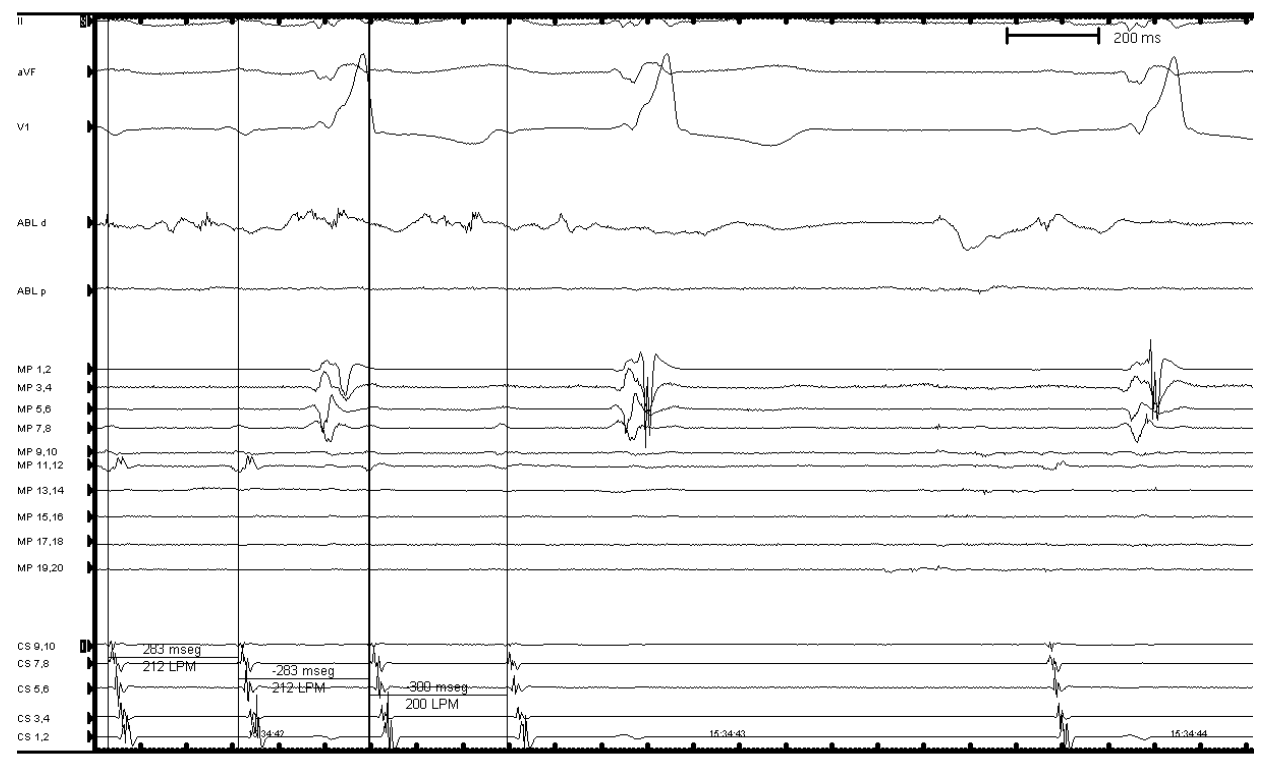 Dealing with atypical atrial flutter can be a very difficult electrophysiological scenario.1,2 The incidence of atrial flutter in congenital heart disease patients is high and it can be poorly tolerated. The circuits involve very frequently the cavo-tricuspid isthmus and that is also the case even for complex anatomies.3 Atrial flutter after surgical repair of an atrial septal defect (ASD) is a well-known long-term complication.4 It is usually recommended for patients with complex anatomies to have available an electroanatomical mapping system when RF is attempted, to ensure that the circuit is well characterized. In our case, we elected a hybrid approach initially without high-density mapping but then switched to activation mapping to delineate a new circuit (flutter 2) that was likely entraining flutter 1.

The approach for macroreentrant flutters such as the one we depicted, is based on anchoring the RF lesions to an unexcitable scar so the circuit is interrupted. The multiple scars present make it unlikely for a focal RF lesion to terminate flutter and achieve non-inducibility and avoid recurrence. High density mapping and new algorithms that depict the circuits with high accuracy are a great addition to the field and may help streamline the process of mapping and ablating in such difficult scenarios.5