Catheter ablation of the right ventricular outflow tract (RVOT) premature ventricular depolarizations (VEs) is highly efficacious. However, VEs originating close to the His bundle is an uncommon form of RVOT-VEs, occurring in about 5% of all RVOT-VEs undergoing catheter ablation. Ablation carries a potential risk of damaging the conduction system. We describe a case of RVOT-VE, mapped by high-density electroanatomical mapping and electrocardiographic criteria, with the successful ablation site close to the His bundle. The methods to avoid heart block are discussed.

Ablation of premature ventricular depolarizations (VEs) from the right ventricular outflow tract (RVOT) is associated with a high success and a low complication rate. These VEs share a common feature of inferiorly directed frontal plane QRS axis.1,2 However, due to the proximity of the structures close to the RVOT, such as the left ventricular (LV) outflow and the conduction system, radiofrequency catheter ablation (RFA) may be more difficult and can damage collateral structures. While the origin of the VE site is defined as the site of successful ablation, this reflects the anatomical feasibility, and VEs can also have several exit sites.

A 62-year-old female complained of palpitations, with symptoms due to frequent VEs (10.9%/day). Her VE exhibited a positive frontal axis in II, III and aVF, with precordial voltage transition at V3, giving a left bundle branch block (LBBB) appearance (Figure 1). An MRI of the heart showed no ischaemia, normal LV function but a borderline RV function of 48.7% (N 51 – 71%). 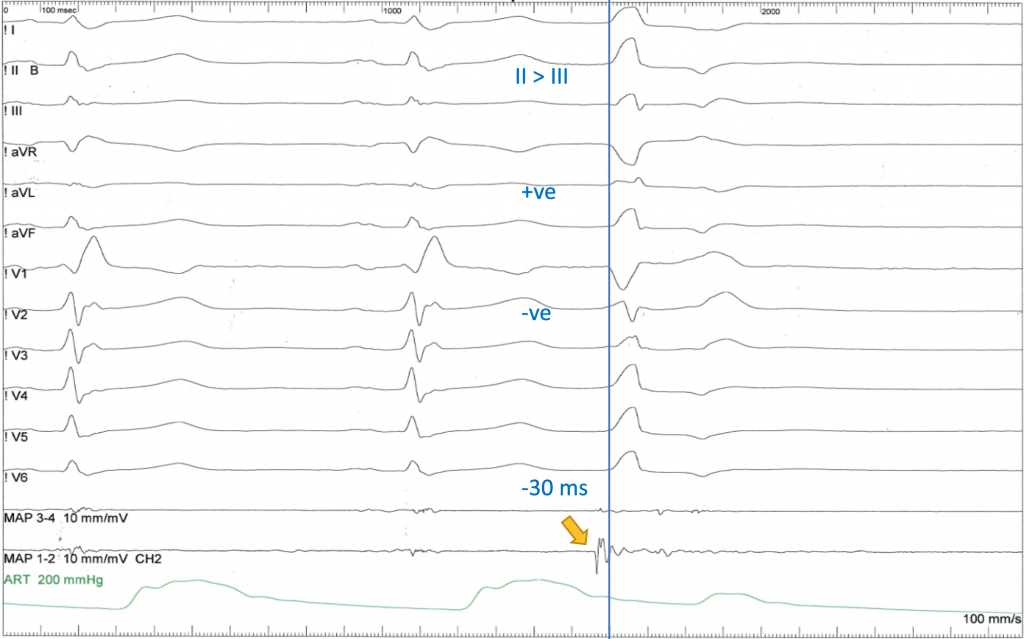 A CARTO activation map was performed initially in the RV and pulmonary artery (PA), with automatic mapping algorithm of the VEs (Figure 1). There were no early supravalvular PA activation sites. An early RV site -30 ms before QRS was mapped in the RV inflow (Figure 1 and Figure 2). This was designated as VE1. Ablation at this site abolished VE1. 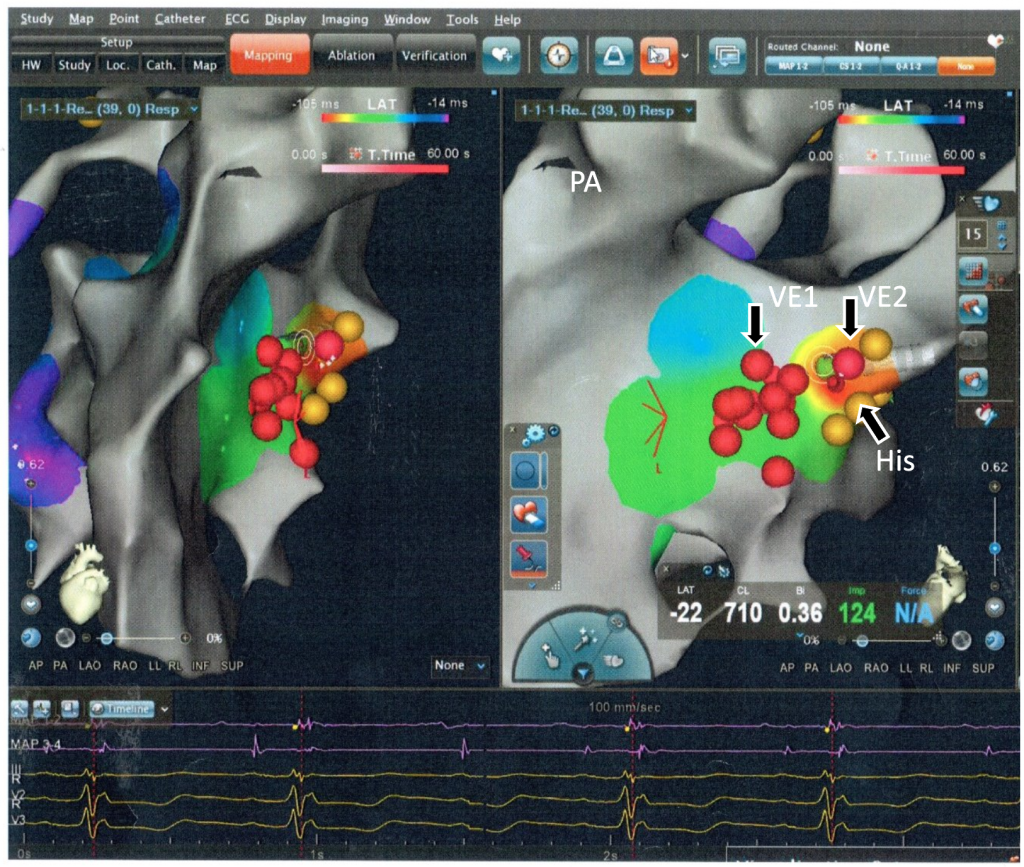 However, another VE with a different morphology emerged after ablation of VE1 that showed a change in the frontal axis with III becoming negative, and the precordial transition now occurred earlier at V2. In addition, it was noticed that aVL had changed from a +/- in VE1 to a fully positive voltage in VE2. A left ventricular outflow tract (LVOT) mapping including the aortic cusps showed no early activation. An early activation site of VE2 was mapped close to the His bundle area (Figure 2 and Figure 3). Pace mapping at this site resulted in a 12/12 matched pace map (Figure 4). The site was about 12 mm from the largest His bundle recording site.

Figure 3: Change in ECG morphology after successful ablation of VE1. 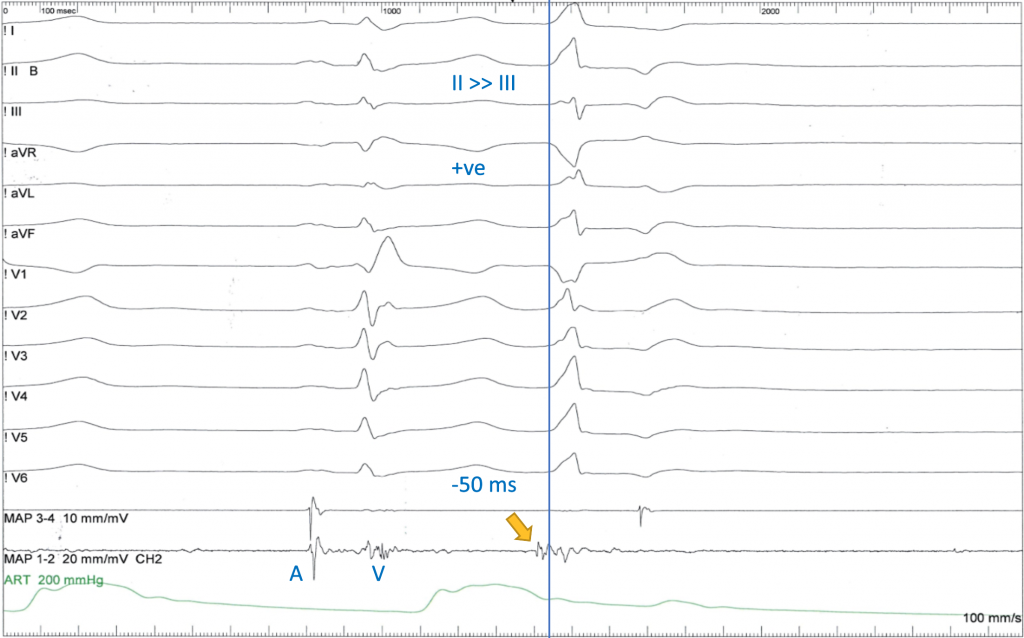 VE2 now showed +ve aVL and decrease positive voltage in lead III suggestive of an inferior and lateral site. At this site, close to the His, the ventricular activation was -50 ms ahead of the surface QRS. ART = Atrial pressure; MAP = CARTO mapping catheter. 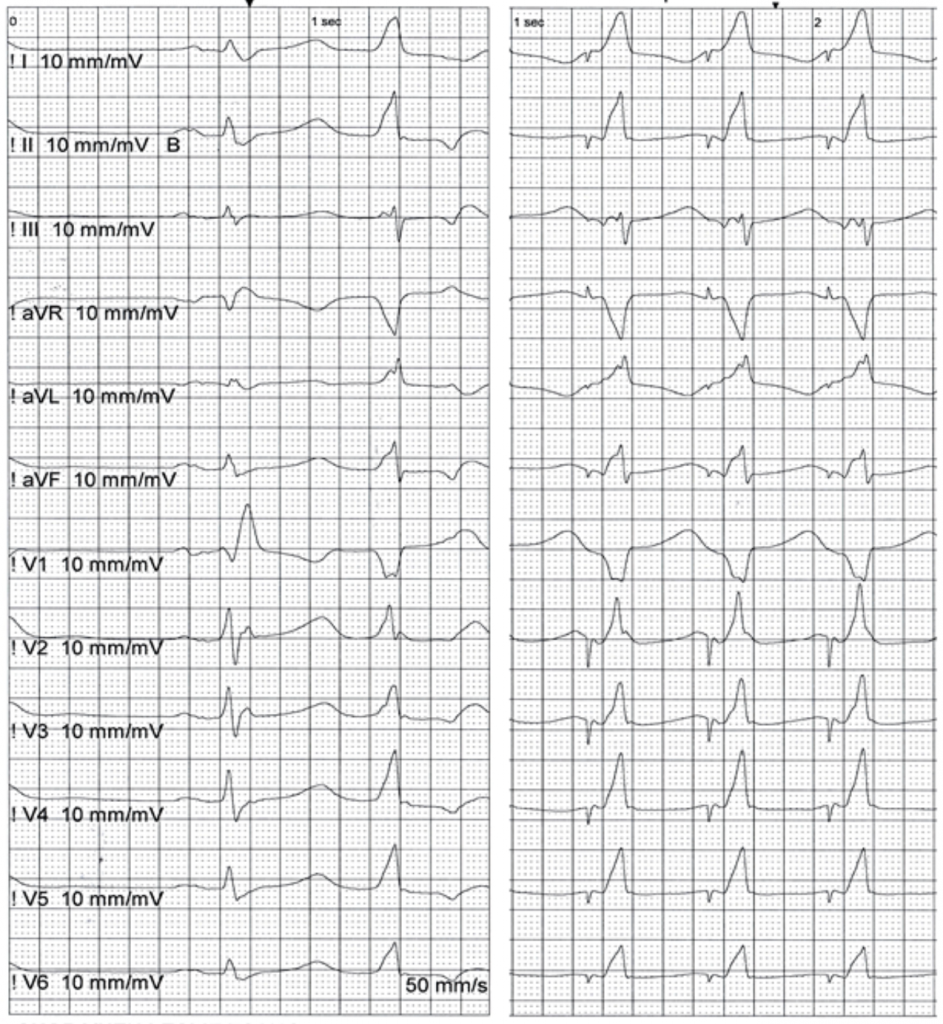 Using an SR0 sheath for stability, cautious applications of radiofrequency (RF) starting from 10w were performed, observing junctional rhythm and VE frequency. At the successful site, a short run of junctional rhythm occurred after a total RF application of 39 seconds. This abolished VE2 (Figure 5). Post ablation showed normal PR interval, and 1:1 antegrade conduction identical to that before the ablation. She remained asymptomatic without her clinical VEs on Holter and a normalised RV function on MRI. 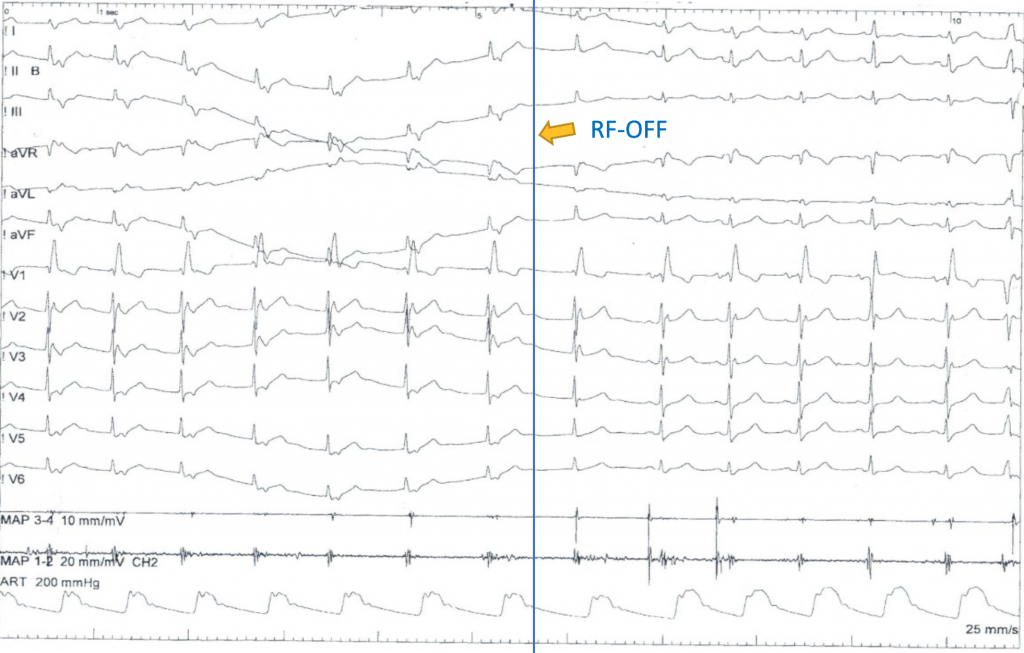 We reported a patient with VEs initially thought to be in the RVOT region. The classical RVOT-VEs originate in anterior and cranial sites due to the anterior and leftward direction of the RVOT and PA. This would give a negative aVL and precordial transition later than V3. The CARTO map and successful ablation site identified VE1 as beneath the PA in the RVOT area. On the other hand, VE2 had a strongly positive aVL axis. As aVL is a superior lead, a positive aVL is highly suggestive of a low-lying focus, especially at the His region.1 The earlier transition at V2 suggests a more posterior site, as the true RV septum is posterior. ECG orientation in the frontal and transverse axis to localise the site of RVOT-VE origin have been described.1,2 An algorithm that may add to such localization has also been reported from our group.3 We have used these criteria, especially the changes in axis, to facilitate RF catheter positioning.

Ventricular arrhythmias occurring in the para-Hisian region has long been recognized.4 An incidence of 5% was reported amongst VEs showing an RVOT morphology and RF was successfully used in these cases without inducing heart block.5,6 We have used electroanatomic mapping to locate the site of largest His electrogram, and titration of RF energy starting with low power. With a sheath stabilized catheter and avoiding the largest His recording, we were able to ablate VE2 successfully without damaging the conduction system.

Induction of heart block is a significant risk. Cryoablation with cryo-mapping has been suggested as an alternative treatment.7 In a registry group of 33 patients with RV VEs, of whom seven were para-Hisian in origin, overall cryoablation success was 55%. However, all para-Hisian cases were successfully ablated. The authors suggested that this energy source may be an alternative to avoid collateral damage to relevant cardiac structures (e.g. conduction system, coronary arteries and phrenic nerves). However, cryo energy has not been extensively utilized. A novel pacing strategy has recently been published to avoid RF damage to the His bundle.8 The authors utilized a strategy with His bundle pacing, similar to that used to exclude the septal accessory pathway. At potential sites, before RF ablation, pacing was performed at different thresholds. The site with the lowest pacing energy for His capture and the largest His recording was considered closest to the His bundle. Ablation was carried out at the earliest VE activation site if His bundle could only be captured at a higher output energy, suggesting the RF site was remote from the His.

We reported a patient with 2 VEs, one below the PA and another para-Hisian. ECG changes that suggest a para-Hisian origin is presented. Using sheath for stabilization, electroanatomic mapping to avoid ablation sites with large His bundle and gradual RF power titration, we were able to achieve ablation success without damaging the atrioventricular node.